What are 3D models used for?

3D models are used in many different forms of media such as TV, Games, Movies etc, they can be used to create a character or object to place into a game environment and later can be animated, however they aren't only used for games as they can be used to 3D print objects in real life, create plans when creating new buildings or make animated videos which would be used for special effects such as explosions  and fire and characters. which could then be applied to a model of the body and limbs to create a character model to put inside a game or movie ready to be animated in order to enhance the quality and fluidity of the character. This only applies to 3D games/movies as 2D animations use sprites instead of models.

Mesh Construction
One of the most popular pieces of 3D modelling software is Maya (other examples being Cinema 4D and AutoCAD)which is where the meshes will be made. the mesh is the collection of edges, vertices and faces to make the 3D model. where you start with a simple shape and slowly modify it to become the finished product as shown in the picture below where a box was modified bit by bit to look like a human head as seen with the wireframes, this called box modelling and usually consists of extruding faces of the shape outwards until it looks more like the object you are making, then smaller details are added such as the nose and mouth if making a face for example.

Geometric Theory
Geometric theory is the collection of all the components of a 3D model such as edges(lines connected to the vertices), vertices(corners of each face), polygons(the shapes containing the faces), surfaces(the shapes that make up the object and will have textures on them)and faces(the shapes that go around the edges), these all form to create an element(the finished object)

Shaders
Pixel and vertex shaders are both GPUs(Graphics Processing Unit) that can add shading to an environment in different ways. none of them are better than the other as they are just different styles of shading, vertex shades can be used to add cartoony silhouettes to the edges of the environment as seen in borderlands. Pixel shaders are used to create more realistic shaders by adding extra details such as facial hair to characters or adding more texture to objects using the shading. Generally most software can use both types of shading


Graphics
Direct3D and OpenGL are APIs(Application Programming Interface) that are used to render 3D graphics in games. these APIs enable features such as mipmapping, HLSL shaders and spatial anti-aliasing which will improve the overall picture.The diagram below shows how Direct3D renders 3D graphics. 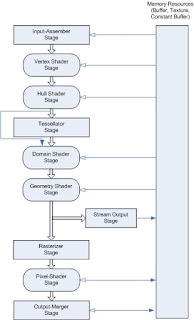 Constraints
Making and rendering 3D models can be a lengthy process and takes up lots of memory which will mean you should get an external hard drive when working with 3d models as you could easily run out of memory, your PC should also be fairly high end to be able to run these programs at a stable framerate

3D development Software
3D development software is what you can make 3D models in, examples are maya, 3D Studio Max, AutoCAD and lightwave. 3D models are usually saved in the following formats: .3DS, .B3D and .OBJ

3D Models in architecture
3D models can be used to create prototypes for buildings as you can recreate the plan without having to actually build anything, when the planning is